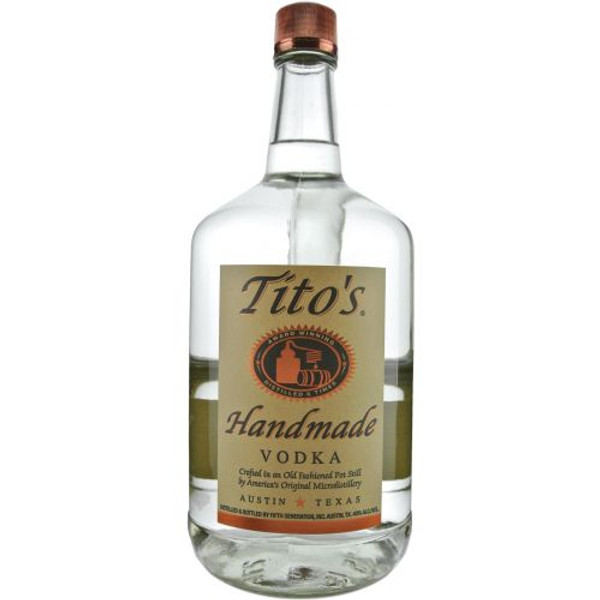 SKU:
619947000037
UPC:
619947000020
Gift wrapping:
Options available
More Information Proof:
80 Proof (40% ABV)
Distiller/Bottler Name:
Fifth Generation Inc.
TASTING NOTES:
On the nose are clean aromas of corn and spices. The palate is sweet, with a creamy mouthfeel and more notes of spices and corn. The finish is peppery with a lingering nuttiness.

At its first appearance at the San Francisco Spirits Competition, Tito’s Handmade Vodka beat out Grey Goose and Belvedere to become the best in its class in the entire competition, awarded with a unanimous vote, a Double Gold Medal.

Tito's Handmade Vodka is produced in Austin, Texas. Founded by Bert "Tito" Beveridge II, in 1997, Tito’s lays claim to the distinction of being the first legal micro-distillery in Texas since Prohibition. Beveridge is a native Texan, born in San Antonio, he got his nickname “Bertito” (little Bert) from his Latino caregivers, it was later shortened to “Tito.” He went on to receive degrees in geology and geophysics at the University of Texas. He spent time in the oil business as a well-site geologist, a subsurface mapper, and a seismic data processor. He was also a mortgage broker before pursuing his true passion. Beveridge is the textbook entrepreneur, starting his vodka brand from humble, small batch beginnings. The original pot-still he used in the ‘90s was quite a curious contraption; 2 Dr. Pepper kegs attached to a turkey-frying rig that was previously used to fry catfish. As gifts, Beveridge would send bottles of homemade vodka infused with orange, black cherries or habaneros to his friends during Christmas time. What started out as a hobby, quickly turned into a fully operational business. Beveridge studied the codebook for TABC and ATF to take on the Texas Alcoholic Beverage Commission, who firmly stated that the law in Texas would not allow a distillery. He perservered and eventually obtained an official license for a micro-distillery in Texas, becoming the first to do so in the US since Prohibition. Under the company Fifth Generation, Inc., Beveridge established the Mockingbird Distillery, producing just 1,000 cases in their first year. By 2007, the company sold over 160,000 cases. Remarkably, all production is still maintained at the southeast Austin distillery, where the facility has expanded from one lonely, turkey-frying pot still to ten industry ones. It is also worthy of noting that Fifth Generation, Inc. employs fewer than 18 people, despite the scale of their distribution. Tito's Handmade Vodka is made from yellow corn, instead of the more traditionally used wheat or potatoes. The resultant spirit has a mildly sweet aftertaste. It is distilled six times because according to Beveridge, “…five times isn’t enough and the seventh time doesn’t make a difference.” This distillation method yields an ultra premium spirit, putting Tito’s Vodka in a class of its own. At its first appearance at the San Francisco Spirits Competition in 2001, Tito’s Handmade Vodka beat out Grey Goose and Belvedere to become the best in its class in the entire competition, awarded with a unanimous vote, a Double Gold Medal. Sales soared. In 2012, Tito’s Handmade Vodka was inducted into the Made in the USA Foundation’s Hall of Fame. Get your bottle of Tito’s Vodka today!

Smirnoff No. 21 Vodka Half Gallon

Smirnoff No. 21 Vodka Half Gallon